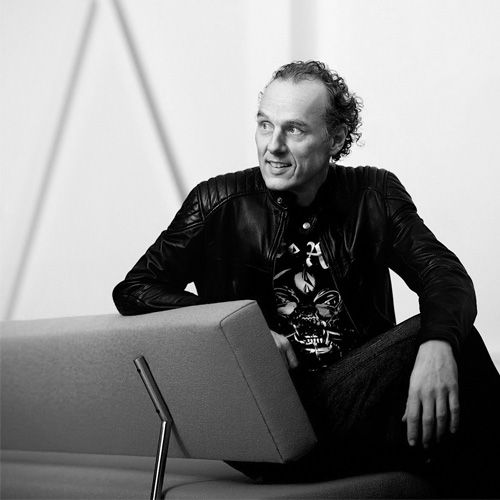 Founder of Richard Hutten Studio
Netherlands
Rotterdam based Richard Hutten is well known for his conceptual and playful designs. As a true innovator, he has established himself as one of the leading international figures in the field, continuously pushing the boundaries of design. As an expert on the Circular Economy, sustainability is a second nature in Hutten’s designs. Born in The Netherlands in 1967, Richard Hutten graduated of the Design Academy in Eindhoven in 1991, the same year he started his own design studio. As a founding member of the famous Droog design movement, back in 1993, he established his name in the forefront of design right away. With a team of experts he is working across furniture, product and interior design. Many of his products have become successful design icons His famous Dombo mug sold over 1.000.000 units world wide, and still counting. His work is held in the permanent collections of over 50 museums around the world making him, arguably, one of the most collected living designers. The list includes MoMA New York, Victoria & Albert Museum London, Centraal Museum Utrecht, Vitra Museum Weil am Rhein, San Francisco Museum of Modern Art, Design Museum London, Design Museum Gent, Chicago Art Institute and the Stedelijk Museum Amsterdam. His work has been exhibited in even more museum, including MoMA New York, Stedelijk Museum Amsterdam, Museum Boijmans van Beuningen Rotterdam, Kunstmuseum The Hague, Zuiderzee museum, Enkhuizen, Museum of Modern Art San Francisco, Design Museum Holon, Moti Museum Breda, Triennale Milan, Louisiana Museum Copenhagen, Übersee Museum Bremen, Alvar Aalto Museum Finland, Kunsthal Rotterdam. In 2008 he became the Art director of Holland’s second largest furniture brand Gispen and since 2017 he has the same role at CS rugs. Hutten’s designs won numerous international awards, such as the Red Dot Award, LAI interior award, The great Indoors award and the German Design Award.
Sessions