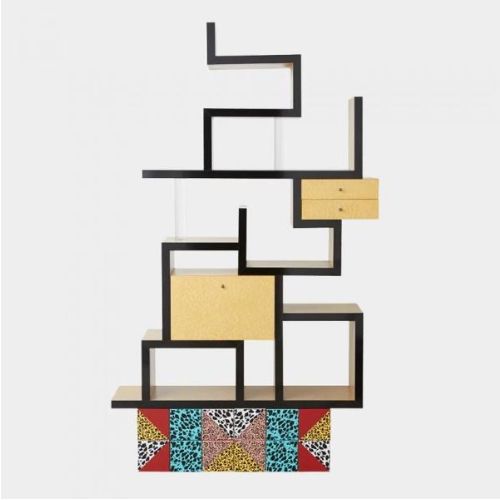 MEMPHIS-MILANO 1980–1988 It’s the evening of December 11, 1980. A group of young designers and architects has gathered in Ettore Sottsass’s living room. The record Stuck Inside of Mobile with the Memphis Blues Again by Bob Dylan plays over and over again: thus Memphis was born, with a two-fold reference to the ancient capital of the Egyptian pharaohs and the birthplace of Aretha Franklin and Elvis Presley in Tennessee. A few days later, a revolutionary collection of design objects was discussed and outlined, one which was to take shape over a few months in the drawings of Ettore Sottsass, Aldo Cibic, Matteo Thun, Marco Zanini, Martine Bedin, Michele De Lucchi, Nathalie Du Pasquier, and George Sowden. The first collection of 55 products of the Memphis-Milano brand, under the guidance of Ettore Sottsass and the artistic direction of Barbara Radice, was presented in Milan on September 19, 1981 at the Arc ’74 showroom of Brunella and Mario Godani at number 2 Corso Europa. This was the period of the Salone del Mobile, and more than 2,000 people crowded outside the gallery, blocking the city traffic, for what immediately felt like an epoch-making event. The new language mixed elegance and kitsch, dialoguing with absurd and irrational shapes, using plastic laminates with patterns that simulate precious materials, but most of all it introduced the pleasure of play into the rational language of industrial production: Memphis-Milano quickly conquered public and press attention all over the world. Together with the first nucleus of participants, Andrea Branzi, Alessandro Mendini, Michael Graves, Hans Hollein, Shirō Kuramata, Peter Shire, Masanori Umeda, Arata Isozaki, Terry Jones, Javier Mariscal, Paola Navone, Luigi Serafini, and Bruno Gregori from Studio Alchimia also displayed in this legendary debut. On the occasion of the Salone del Mobile, Memphis-Milano would present a new collection every year until 1987. Over the years, some of the designers who put their names to Memphis projects include: Thomas Bley, Rudi Haberl, Walter Kirpicsenko, Michael Podgorschek, Daniela Puppa, Christoph Radl, Gerard Taylor, Fabio Bellotti, Robert Mangurian, the American collective Arquitectonica, Maria Sanchez, Nicholas Bewick, Pierangelo Caramia, Beppe Caturegli, Dante Donegani, James Evanson, Giovannella Formica, Shuji Hisada, Massimo Iosa Ghini, James Irvine, Ferruccio Laviani, Giovanni Levanti, Angelo Micheli, Marco Zanuso, Laura Agnoletto, Marzio Rusconi Clerici, Guido Borelli, Johanna Grawunder, Lawrence Laske, Mary Little, Gary Morga, Christophe Pillet, Winfried Scheuer, Marco Susani, and Daniel Weil. As time went by, the leaflets of the early exhibitions were replaced by illustrated catalogues. The logo designed by Christoph Radl, different for the first three collections, settled in 1985 as that of Memphis-Milano, and that same year Ettore Sottsass left the group. The last exhibition of the Memphis group was ‘Luci Lights’ in 1988: since then no more products have been issued under the Memphis brand. The company is now managed by Alberto Bianchi Albrici, who purchased it in 1996 from Ernesto Gismondi, owner of Artemide, after ten years as managing director. The projects designed by the Memphis group between 1981 and 1988 are still produced today in unlimited series, in the belief that design should be understood as a means of communication and not as an expression of elitist art. As a cultural movement, Memphis continues to influence the imagination of the general public, from fashion to the film and television industry. The liberating spirit of Memphis is still a source of inspiration for young designers today: reflections on the concept of design and furnishing, on their limits and aesthetic possibilities, on their social and communicative function and on the creative and productive aspect, as well as on the economic models underpinning them, are now more relevant than ever.